Want to keep your tutoring skills and knowledge up-to-date? Looking for some fresh ideas for your sessions with your learner? Literacy's Network's Senior Director of English Language Instruction, Beth Gaytan, has collaborated with our Audio/Visual Coordinator Roberto Garza to create a series of 30-minute videos on how to tutor your ELL by level.  Settle in with a cup of coffee and enjoy!

Working with your beginning learner: http://youtu.be/6K8SJsMLBRQ

Working with your intermediate learner: http://youtu.be/k-m6lKs5USk

Working with your advanced learner: http://youtu.be/_Sukrs8hIGo

If you have any questions about any of the ideas in the videos, please don't hesitate to get in touch with us! We can be reached at Jennifer@litnetwork.org and Beth@litnetwork.org.
Posted by Jennifer Peterson at 12:30 PM No comments:


Grammar questions from a tutor sent me running to find answers. Here is our exchange:

I am working with G—. She is definitely advanced with her English and has a great vocabulary. One of her goals is to develop a better understanding of the past tense....I am hoping you could direct me to some resources.

Here are some examples of what I am looking for:

Why does the tense not change for a negative past tense? When we form a question in English or make a negative statement, we often use the helping verb to do. “Did you eat?” is a properly formed question. The past tense is in the helping verb do, which became did when you made a question. The main verb, eat, does not change. Notice that we say “Did you eat,” and not ”Did you ate?” The last question sounds horrible to a native English speaker. The same thing happens when you make a negative statement or command. “I did not eat.” The tense is in that helping verb. When you make a positive statement, e.g. “I ate sardines,” there’s no helping verb. However, notice what happens when you add a helping verb for the purpose of making a sentence more emphatic. For instance, when my wife asks me, “Didn’t you remember to buy kale for my green smoothies?” My answer comes out, “I did remember! I did buy kale. The grocery guy just forgot to put it in my bag.”

You can tell your learner this way: “Rule #1: Whenever a verb follows do, did, or does, that verb is in simple form.” The vocabulary of grammar is confusing and specialized. That simplest form of the verb is the infinitive (without the word to in front of it). Infinitives don’t change. Why are they called infinitive? What about them is infinite? It beats the tar out of me. It doesn’t make the matter clearer for language learners to use the term. 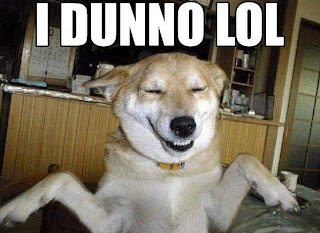 What is the rule for when you add –ing? The –ing suffix is what we use for a gerund, which is the noun form of a verb. Here again we find some more of the abstruse grammar vocabulary that many find off-putting. Put in simple vocabulary for a second language learner, "If it has an –ing is a thing. I like to ski = I like skiing. Skiing is a noun, a thing. Writing is a noun form of the verb to write. So, “Writing reports is not my favorite thing to do at work. Helping tutors with grammar questions, though, is. Raindrops on roses and whiskers on kittens are also among my favorite things.”

What is the rule for adding ‘a,’ as in “Did you have a good time?” versus “Yes, I had fun.” If the noun is something that can be counted, e.g. good times, bananas, conniptions, lobsters, bottles, haircuts, etc., you may add the article a. If it is something that you can’t count—things like fun, beer, time, blood, dust, love, water, sand you cannot use the article a, since it is like  saying a number—one. You don't say "I have a dust." If you’re looking in a grammar resource for this, the term to search is count vs. non-count nouns.

If you want to find exercises to teach and reinforce the first two items, the subjects to look for are question formation and gerunds. Knowing the grammar terms is helpful for you, the tutor, in this case. Daves ESL Café is a nice place to search for answers and activities. I also found a list of questions designed to start conversations: http://iteslj.org/questions/. You can pick a topic, such as books or sports, and you’ll see dozens of questions that you could borrow for practice.

For grammar questions in general, you can look in delicious.com: https://delicious.com/literacy_network/grammar.
Those are just a few thoughts to leave you with. Did this message help you? Writing it helped me. I’m going to put it in a blog post.

Posted by Brian Anderson at 9:22 AM No comments: 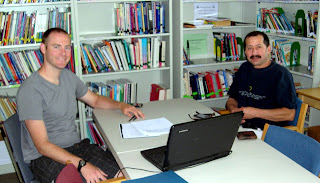 Once in a while a tutor-learner match happens that seems far too good to be true.  Today newly matched ESL tutor Scott Reitmeier met his learner Esteban Patiño for the first time in the Literacy Network Library. As people usually do in first meetings, Esteban asked Scott what he did for a living. Scott is currently a Madison police officer. On hearing this the normally calm Esteban may have widened his eyes a little. He, it turns out, was a police officer, himself, in a district near Mexico City in the 1980s and 90s.

Scott described the moment immediately after they learned what they had in common. “Police language is a lot more universal than I thought. He lifted up his shirt to show his scar.”  Esteban had been shot in the line of duty during a gas station robbery. Though he continued to serve in the police force, the experience ended his time as an officer on the street.

Scott, 33, who had needed to reschedule their first meeting appointment because he had been summoned to testify in court, shared a tense experience of his own, in which he had needed to fire his own weapon in the line of duty. Actual discharges of weapons by police in the U.S. are rare. The New York Times reported in 1998 that “nearly 95 percent of New York City's 38,000 officers have never fired their weapons while fighting crime.”*

Esteban, 50, is relatively new to Madison. From experience, he said, he knows that there are good, professional cops and bad ones everywhere in the world, but he has a high opinion of the Madison Police Department. He works at a meat packaging factory in New Glarus. One reason he wants to learn English is to find a better job closer to where he lives. Previously he lived in Los Angeles for four years, where he said it was very possible to get by with limited English because of the city’s omnipresent Latino culture. On the day he arrived in Madison, however, he was dismayed to find he could not find anyone in his neighborhood who spoke Spanish. Today the two of them agreed to work on his English together for two hours a week for at least six months.
Both Esteban and Scott agreed that there was a kind of instant bond between them, a shared experience that comes with a particular worldview. If a movie is to be made about Scott and Esteban, it will not be anything like “Lethal Weapon.” It does, however, call to mind the last line of “Casablanca,” where Humphrey Bogart says, “I think this is the beginning of a beautiful friendship.”

What Not To Say

Please check out this website: teachmama.com/learning-during-read-alouds-5-things-never-to-say-to-emerging-readers/ The title tells you  what it's all about, but the common-sense advice is surprisingly insightful. This short article will become required reading for all basic literacy tutors at Literacy Network. It outlines a humane approach to helping someone who struggles with reading.

What not to say to an emerging (i.e. beginning) reader:  The sign at right is one of the first things not to say.  The article succinctly tells you why not to say it and suggests  alternatives. The quotation below suggests something much more positive and productive to say.


INSTEAD: If the mistake didn’t interfere with the meaning of the text (like if it was ‘a’ for ‘the’ or ‘fine’ for ‘fun’) let it go.

Do. Not. Interrupt. Your. Child’s. Reading. Period.
How would you feel if you were putting your heart out on the line, trying something you weren’t totally comfortable with, in front of someone who you were afraid would challenge you, only to have that person stop you, interrupt your flow, and make you start over before you even finished?  Over and over and over again?

The other things to avoid saying or doing:

This website is designed, as are many sites for emergent readers, for children. But the advice it gives here is even more important for the adult emergent reader, because they have a longer history of humiliation  from their reading. Let's all remember to respect the learners who have asked us for help. Teaching people and learning to read are positive, life-affirming experiences if we remember these things.
Posted by Brian Anderson at 12:15 PM No comments:

How to Use Delicious.com

Links of Interest: Friends and Resources